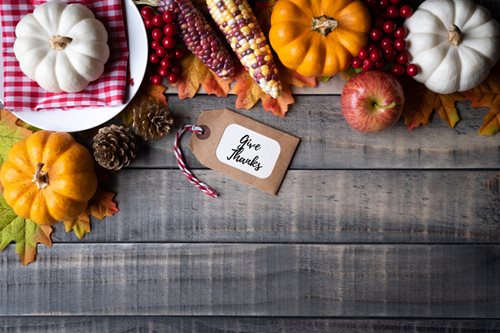 As the weather begins to grow cooler and the leaves begin their transition to autumnal splendor, our minds begin to turn to the next holiday — Thanksgiving. In Canada, it takes place on the second Monday of October and is celebrated with family, food and festivities. It holds a special place in our hearts, and gives us each a moment to give thanks for what we have, and consider those who have less.

Thanksgiving has been such a staple holiday for decades, it’s hard to imagine a time when it didn’t exist, or even when the traditions were different. The turkey, pumpkin pie and fall vegetables are so integral to our conception of this holiday, they almost seem to be the holiday in and of themselves. But have you ever thought about where these foods come from and how this holiday started?

Thanksgiving has a rich and varied history in this country, with origins going back 500 years to the very inception, and nearly 150 for our modern interpretation. Here’s how Thanksgiving has evolved in Canada over the eras:

The Birth of Thanksgiving

According to some accounts, the very first Thanksgiving in North America occurred in 1578 with Martin Frobisher’s attempted crossing of the Northwest Passage in modern day Nunavut. The voyage was fraught with peril, and Frobisher ended up losing an entire ship to the ice. In spite of this, most of his 15 ships and crew survived to make it to their anchorage in Frobisher Bay. It was here that the voyages minister insisted they make a special communion and share their thanks with God for surviving their ordeals, laying the foundation for our modern Thanksgiving.

Since then, much has changed. Thanksgiving was celebrated at various dates and with different traditions over the course of the next couple centuries. French Canada and English Canada had different traditions and days of celebration up until their unification. It was finally made an official civic holiday on April 5, 1872 to celebrate the recovery of the Prince of Wales, who had been suffering from a serious illness.

Beginning in 1879 it was recognized as a National Holiday celebrated in either late October or early November. After being disrupted by World War I and II, Canadian Thanksgiving was officially declared to occur on the second Monday of October in 1957, and has been celebrated on that day ever since.

Both in the United States and in Canada, Thanksgiving has religious roots. It corresponds closely with the Church-sanctioned harvest festival which occurred in both England and continental Europe. Most of the trappings we associate with Thanksgiving comes from this tradition, as churches at the time were decorated with gourds, wheat, pumpkins and cornucopia, which we now associate with modern Thanksgiving.

One tradition that separates Canadian Thanksgiving from its American counterpart, is that our government here gives a specific call for what to be thankful of each year. Originally it was as simple as a bountiful harvest, but has been everything from thanks for the end of the war, to a simple “For general thanksgiving to Almighty God for the blessings with which the people of Canada have been favoured.” Many individuals and family will take time before beginning the traditional Thanksgiving meal to give thanks for a specific reason either pertaining to their lives or the world at large.

One thing that both Canadians and Americans share is a love of Thanksgiving sports, notably football. The Canadian Football League (CFL) plays a double-header Thanksgiving classic on the holiday Monday, one of only two Mondays each year the CFL plays on a Monday, the other being Labour Day. It provides ample time to lounge around the TV recovering from the feast traditionally held on the Sunday night for most Canadian families.

It’s hard to even imagine this holiday without a legendary feast involved. And most of the food we eat has a storied tradition harkening back to the pilgrims who landed at Plymouth Rock. Usually called “The First Thanksgiving”, the first feast had some odd items you might not expect in your Thanksgiving spread including duck, lobster, clams and venison. But it also had some of our staple items including squash, pumpkin, ham and, according to William Bradford, “there was great store of wild turkeys, of which they took many.”

Because of the time of year Thanksgiving takes place during, many of the foods we associate with the feast. Squash and brussel sprouts are common sides because of their relatively late harvest, with pumpkin and apple pie serving as standard desserts for the same reason. Because Canada shares a lot of traditions with our American counterparts, Turkey has become our canonical protein with its popularization from figures such as Alexander Hamilton who said that no “Citizen of the United States should refrain from turkey on Thanksgiving Day.”

And who can forget gravy and cranberries? Preparing turkey gives many home cooks the opportunity to make a rich and flavourful gravy from the fat of the bird, which complements the traditional mashed potatoes wonderfully. And because the meal tends to be so rich, the bright and tangy cranberry sauce has also a staple of the Thanksgiving feast. Most families prepare vast amounts of food, necessitating an early start to the meal which usually takes place in the afternoon to offer time for consumption (and digestion!) The benefit of so much food is the copious leftovers which are often shared with attending family and friends to enjoy for days to come.

At Heart To Home Meals, we take Thanksgiving food seriously, and that’s why we offer several different meals inspired by the food of this holiday. In the mood for a traditional feast? Try our Turkey with Cranberry Orange Sauce, Traditional Turkey Dinner, Turkey with Apple and Sage Sauce, or Sliced Turkey in Gravy, which all evoke the feeling of the season and include some of the traditional sides you’ve come to expect.

The air is getting colder, the pumpkins are getting bigger, and the trees are beginning to turn more beautiful. As we approach our very own Thanksgiving this year, it’s important to reflect on where and why this traditional celebration has come to be. While we may not be battling ice storms in the Arctic, taking time to be grateful for the simple things in life is just as important.